In the crowded Betjeman Marquee, John Lanchester took centre stage for a discussion with travel writer Philip Marsden in the penultimate event of the North Cornwall Book Festival. Lanchester’s connections to Cornwall are through his grandmother. After living most of her life in Hong Kong, she retired to Looe, the small coastal town she would describe as “sub-tropical”. This went down well in the busy tent. 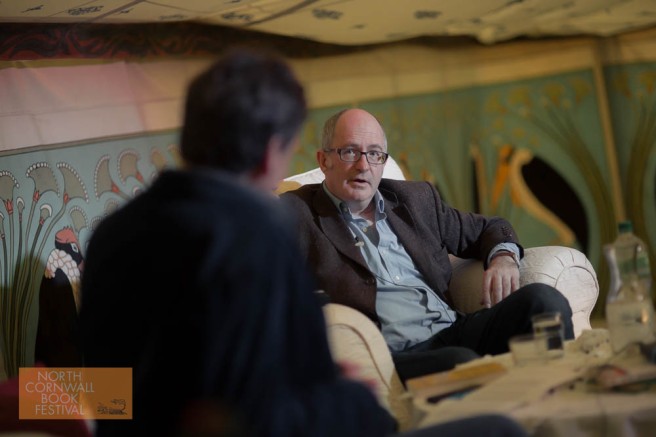 Marsden began his questions by asking about Lanchester’s previous work. His diverse accomplishments in writing both fiction and non-fiction are clear; his most recent novel, the critically-acclaimed Capital is currently in production for a BBC series, adapted for television by Peter Bowker. He likens the process of writing to solving a mathematical equation, and discusses his ode to the anti-hero in his 1997 novel The Debt to Pleasure. Tarquin is a protagonist obsessed, his narrative told in part through recipes, “Cookbooks are an interesting form,” John remarks, “they’re full of stories and information”. He describes that he wanted to explore what would happen to a cookbook if you let the story take over. The result of which earned him the 1996 Whitbread Book Award in the First Novel category and the 1997 Hawthornden Prize.

This algorithm in Lanchester’s fiction writing is reflective of his wealth of expertise in finance and economics, as he goes on to introduce the captivated audience to his new book, How to Speak Money. This new work, part polemic, part guide,

discusses the language of money. Understanding this language allows us a much better position from which to identify the structures designed to enable banks to avoid accountability. As Lanchester explains, “there are no fingerprints on the murder weapon by design.” It was at this point I made a mental note to revisit the banknotes-sock-mattress savings scheme. Money has perhaps become what life is all about, he explains, rather than its former role as an aspect of a life, “It is the new determinant that is shaping the world”. We are on the verge of becoming a society in which we are unequal, hugely lacking in opportunity. It is a frightening situation that when a child is born, in that first breath it might also be drawing in a life expectancy, an educational level and a pattern of health and earnings, pre-imposed by the society we are establishing.

Lanchester describes how the book came about as a result of his being continuously asked to comment and to explain trends in economics. “The common thread was always explanation”, he says. We are each entitled to an understanding of these terms which are affecting our financial lives; as soon as we have access to the language, we are able to have a conversation and it is in this exchange that we are able to at least raise questions on the subject.

Lanchester discusses that with hindsight, we are able to recognise the “funny smells” that preceded the 2008 financial crisis, but as he quotes Warren Buffett, “It’s only when the tide goes out that you can see who’s been swimming naked.”

Conversation moves naturally on to the language of politics, “I wish Orwell was

alive to write about the word “austerity”. Again it comes back to meaning, perhaps this is why Lanchester chooses words as his craft. The meaning lies in an equation, a structure. Each of his novels follows a pattern or fits into a framework. For Capital, the story is set over a year, with each character allotted their section, their part in the bigger equation. In How to Speak Money, the algebra is in the narrative of greed, the space between calculation and explanation is filled with language, demystifying the complex world of finance.

How to Speak Money is published by Faber & Faber and is available through all good book shops and online.